Jessica Simpson has opened up about that time in 2009 when it seemed like the entire world was shaming her after being photographed at a concert in Texas wearing mom jeans. We were guilty of this too! When these images came out, that's all anyone was talking about, and we ALL had something negative to say. Looking at these photographs now, we see absolutely no reason for why she should have been shamed. 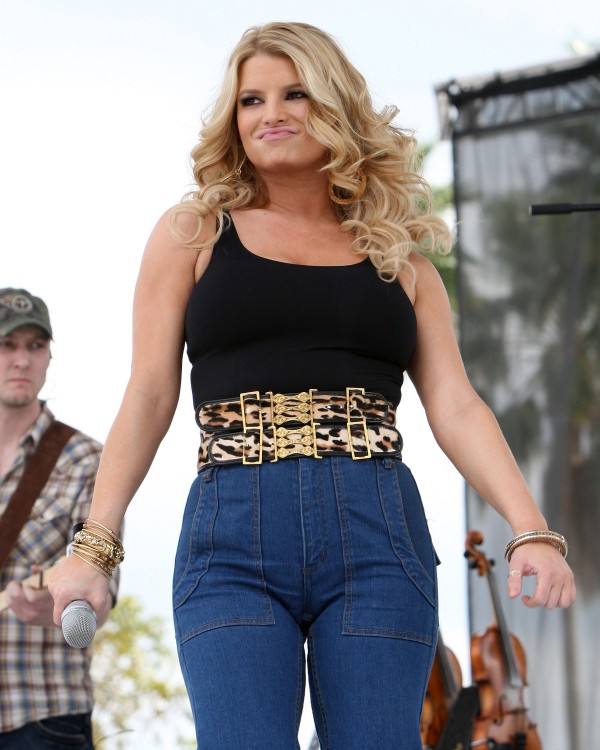 This incident happened during a concert in Texas, and within minutes of Jessica taking the stage, the photos were splashed all across the internet. The horrifying headlines read “Jumbo Jessica”, among many others, and they were mainly suggesting how Jessica had “let herself go” and “what was she thinking wearing those unflattering mom jeans?”. We now know and realize, how very wrong this was. If you were wondering, at the time these pictures were taken, Jessica was a US size 4!

After the very public shaming, Jessica retreated from public view for about 6 months. Eleven years later, Jessica finally opened up about this incident and how it made her feel. Speaking on the Today Show, Jessica admitted that the peoples' response to the photos left her heartbroken.

“This picture that circulated and went worldwide broke my heart,” she said. “Well, not the picture necessarily, but the caption. Like, all the captions. It went viral. I was so confused.” Jessica admitted that at the time, her initial reaction was feeling embarrassment for her then boyfriend, Tony Romo. “Tony never made me feel [insecure],” she said, “I always felt confident when I was with Tony. But I was taken down by the world.”

Jessica spoke to Glamour as well, and said that when she went onstage that day, she felt confident. But, after the whole fiasco, admitted that she felt uncomfortable going on the stage and that the abuse destroyed her passion for performing. “I felt good up there,” she said. “I felt confident. And then it ruined the stage for me. And the stage was my home. It broke my home.”

“I'd already had broken moments within a home where I had to walk out of a marriage,” she continued, “But my stage has been like my home since I was, like, a child. That's where I could be honestly alone with myself.”

Clearly, 2009 was a very different time! “I'm so happy that times are changing now and more women are accepted for who they are,” she said. “People are flaunting themselves at every size, because that's how it absolutely should be.” Jessica wrote a biography, called Open Book, where she says that she believes this whole thing started after her appearance in the 2005 movie, Dukes of Hazzard.

“The Daisy Duke moment created a gold standard Jessica,” she wrote. “The ‘before' for every ‘is she fat or is she thin' story for the rest of my career.” “It is not easy, it hurts,” she said. “And still, I feel like we all look in the mirror and are not 100% of all the time. We all see our flaws … and mine were just out there for the world to rip apart when they weren't even flaws. When they were made into flaws that I didn’t know I had.”

You can watch Jessica's interview with the Today Show below. If there's one thing we can all learn from this, it's this: we should not be judging or shaming anyone, especially someone we don't even know. Words can hurt a lot more than we think, and at its core, it's a form of bullying. We teach our kids not to bully, but if we can't follow our own advice, what are we even trying to prove?

LOL I couldn’t help laughing at the headline!

[…] Jessica Simpson Horrifies Us With Her Mom Jeans […]

holy! wat happend to her?! she was super skinny? wat got to her? :S she still looks pretty and all and i totaly agree with u

[…] seems as if Jessica Simpson’s life is taking somewhat of a downwards spiral. After the “mom jean” fiasco where Jessica was slammed all over the internet, her self confidence might not be where it should be. While she was performing a concert in Grand […]

0
Reply
Jessica Simpson Goes on a Diet | How Celebs Diet

[…] Jessica Simpson has been bashed left and right for her recent weight gain and even though we think she looks great with all her curves, some people in Hollywood think […]

Those aren’t mom jeans. They are called ” HIGH WASTED”

I am jealous of Jessica Simpson. What a hunky boyfriend she’s got. I wish I am as perfect as her with beautiful face and curvy body.

The Surprising Benefits of Oatmeal for Your Skin: A Complete Guide

8 Must Make Homemade Face Packs For 2023

Foods for Healthy Hair: 10 Surprising Foods that Can Boost Your Hair Health

What is Gua Sha?

How to Care for Your Hair in The Winter